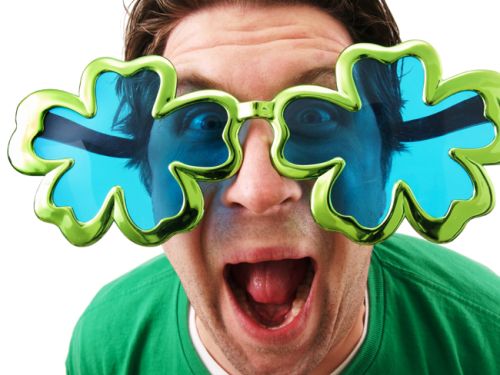 With Saint Patrick’s Day tomorrow (and falling on a weekend, no less), lots of folks are gearing up for more than a typical dose of merriment.  This is a holiday where even the most mild-mannered out there sometimes take celebration to the extreme, meaning on Sunday morning there will surely be plenty of folks out there paying the price for having a year’s worth of fun in about 8 hours.

If this sounds like you – or if you just want to have a night out without wrecking your workouts for the week – here are some tips for bouncing back and take advantage of Sunday as one more great chance to go for a run.

Drink water.  Dehydration is the biggest cause of feeling lousy after drinking alcohol.  (Green food coloring may be a close second.)  As a runner, you’re probably already doing a pretty good job of staying hydrated, so just be sure to keep it up even if you’re having a few green beers.  Leave room for plenty of water while you’re celebrating, once you’re winding down, and first thing when you wake up.

Eat something.  Make sure you’re getting some decent food in your system, both during the party and the next day.  If you aren’t feeling super hungry, just go with something simple like scrambled eggs, toast, or oatmeal.  Milk is also a good choice, since it has lots of nutritional content and will help you rehydrate at the same time.

Don’t overdo it. You know those green-clad revelers with the beads and the face paint who you see staggering from bar to bar in the early afternoon?  Just for the record: that doesn’t usually end well.  There’s honoring the day and having a good time and then there’s setting yourself up for a night hugging a toilet someplace (or much worse).  Drinking too much usually comes from drinking too fast.  Take your time, enjoy yourself, and don’t worry about keeping up with your buddies.

Exercise!  Even if you go easy on the alcohol and just have a late night, going for a run might not sound like the most fun idea in the world on Sunday morning.  Remember, exercise will not only help you get up and at ‘em rather than wallowing around at the house all morning, but it will also kick-start your metabolism, giving your body a natural boost as it works to detox from the previous night.  You won’t regret getting out for a run.

Of course, above all, just be safe out there – and good luck to anyone headed out for a Saturday Shamrock Shuffle or other St. Patrick’s Day running event!

This entry was posted in Motivation, Running. Bookmark the permalink.